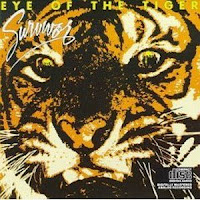 This month, the parental units came for a visit to our humble abode—their first since our addition of the Rock Band video game to our family dynamic; and by dynamic, I mean, dysfunction.

As a result, our living room, the central point of our house and shrine to our big-screen TV, has changed since their last visit. Now, it’s not just the place for the couch and the TV, it’s home to two guitars propped up against the wall and a black, plasticky but imposing-looking drum set.

Anyhow, the presence of the faux instruments draws the color commentary from the parents.

“Oooh, has someone taken up the drums?” Mom says this precociously, knowing my son has begun drum lessons (of the real variety).

“Uh, not exactly, Mom. Those are the drums and those are the guitars for our new video game, Rock Band 2. We play it on the TV.”

“You should play, Grandma!” My son thinks everyone should play everything. I love it. And he’s right.

I say, “Yeah, Grandma, you should play” (I say that ‘cuz I’m evil). “And Grandpa should play, too.” Oh, I love being evil. And my evil is equal opportunity. No one is spared.

“I don’t think so,” Grandpa grumbles. He crosses his arms.

My son’s enthusiasm gets Grandma excited, even if she’s confused. “Oh, come on, Grandpa. Let’s try.” She can’t resist her grandkids. She gives Grandpa a look and then appeals to me. “Tell your father to try.”

Ok, momentary sidebar: I have a rule—don’t air the family secrets on the blog. It’s not right, and not fair. Of course, I have another rule. If something is funny, break the rules.

So here it is; family secret: my parents love karaoke. They have a machine at their house plugged into the TV. The real deal. They croon to Elvis and Frank whenever company comes over. They’re like drunken Japanese businessmen, but without the sushi. They can’t help themselves.

It’s the same every Thanksgiving we go to visit. No quiet moments. Those are filled in with, “Jailhouse Rock” or “My Way.” In my dad’s head, he’s Elvis. And when he gets started, there’s no stopping him. He starts with “just one Elvis song” and then it’s suddenly American Bandstand. He’s like Angelina Jolie and African orphans. He can’t stop at just one.

“How is it like karaoke?” he asks. I’ve gotten his attention. “I don’t want to play the guitar or drums...”

“That’s okay.” I smirk and pause for dramatic effect. “You can sing.”

“Livin’ on A Prayer?” See, maybe it is like Bon Jovi’s house.

“Hungry Like the Wolf?” I know I’m on thin ice now.

Dad scowls. “Don’t you have any Sinatra?”

Mom starts singing it for him. Dad frowns again.

“Just try it,” my daughter says smiling. She’s encouraging, I guess. Or, she’s inherited my sick sense of humor. Either way, I’m proud of her.

“Okay,” my dad says, though he doesn’t sound quite so excited anymore.

But, with my mom on guitar, my son on the drums, my daughter on bass and my father at the microphone, the song begins.

Now here’s a tip: If you haven’t experienced something truly surreal, put your AARP friends and relatives in a faux-band and sit back to watch. It may not be “American Idol” but it’s just as entertaining. And in the home version, you can be Simon Cowell.

“That was like the death cry of a cat, falling off a building. Hideous!” Why do we love that Simon? Maybe he’s got a little evil in him, too…

As the song proceeds, it’s clear my dad can’t read the lyrics scrolling across the TV, in spite of being a foot away from the big screen. Did Elvis ever have that problem?

Instead, Dad begins to sing from memory.

After a verse or two, it’s clear the memory ain’t what it used to be. I try to remember when Rocky III came out and whether or not my father has even seen the film….

Every few seconds he blurts the word “Tiger!” in beat with the song, and then mumbles the rest. It’s like, “Tourette Syndrome—The Musical.”

Hey, that’s good. Maybe I’ll write that down for later. Another good idea like my screenplays, “Supermodel Astronaut,” or my new one, “Ninja Leprechauns.” Man, how do I do it? The good ideas just flow, people. Get yourself an English degree. I’m telling you!

His blurting continues and the mumbling follows as the song plays on and Mom struggles between watching the TV, watching the guitar, and listening to my dad.

I’ll give him this—he mumbles on key. The blurting, not so much.

When the song is finally over, my mother proclaims, “Well, I sure do have respect for real guitar players, now!”

“That’s not a real guitar, Grandma.” My son is very literal.

“Well, I’m just saying it’s hard.” Then, probably out of fear that she’s upset my son, she adds, “But, that was fun.” She sounds only half-convinced.

After the one song, Dad hands me the microphone. He’s had enough.

My kids convince Grandma to try the drums and start a new song. “Hungry Like the Wolf” never sounded like that before, but they don’t know that song anyway, so it sounds perfect.

Halfway through the song, my mother realizes that the drums are color coded to match what’s happening on the screen and announces her surprise. “Oh, there’s the yellow...”

My son rolls his eyes.

My daughter smiles at me. We’re thinking the same thing. This is heaven.

In the end, I have to say—it was a great memory. I highly encourage you all to try the recipe:

Blend these ingredients in your living room until totally uneven, misshapen, and inappropriate. Then, play.

The kids seemed to enjoy it, but the real kudos goes to the parents for putting up with it. Afterward, Mom needed a nap and Dad wanted coffee.

The whole episode reminded me of last summer when the kids convinced my folks to try the “Harry Potter” jelly beans—the ones flavored like vomit, rotten eggs, and dirt.

Dad popped one in his mouth, knowing he might be in for a surprise, but apparently unfazed by the risk.

My son had asked, “What flavor is it?”

Come to think of it, my father had the same look on his face after “Eye of the Tiger” that he did after he tried that jelly bean.

He chewed, frowned, and then simply said, “It tastes like someone farted in my mouth.”

Then, like now, I had the same thought: Music to my ears.

I'm only more convinced that we MUST get Rock Band now. I had only realized it's half potential through watching a maniac 7 year old beat on it with a passion that shamed my own music degree and made me weep with silent laughter.

Well, this hits a little too close to home. Poor Farfar (sp?) ... I too have been forced to play "Eye of the Tiger" on Rock Bank at your house. Visitors to the WD house ... beware!

I can see it all... This is beautiful. Thank you for sharing!!!

Thanks you for starting my move with tears (of the laughing sort). I haven't laughed till I cried in the longest time. It is great to know you can still bring it out of me. I love your folks. They are so refreshingly themselves. They produced you too.