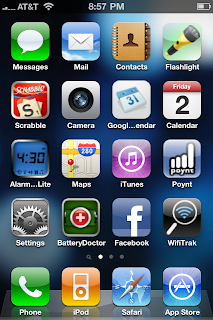 It’s just a pocket-sized rectangle, thinner than my thumb. A single button in front, up-and-down buttons on the side, and a single hole on top. I’m talking about my new iPhone 4, people! And I think I might be in love.

I know what you’re thinking—how can a man love a machine? We don’t have that much in common. I mean, I do have a button in front, too, but mine is of the “belly” variety. I have holes, too, but let’s just leave it there.

Now, I have to tell you, physical differences aside; this iPhone really does it for me.

Truth be told, I had a brief affair with a phone before: the iPhone 3GS. I got my 3GS phone a mere 30 days ago. But when they announced the 4’s were coming out, my love for the 3GS waned. I wanted the 4. As luck had it, I was still in my trial period and, for the cost of a restocking fee of $30, the new phone was mine.

I know it sounds harsh. I left my first love for the next best thing. I suppose that’s true. But for those of you without an iPhone, let me break it down for you:

Imagine a relationship that’s all about you... You can be selfish and self-involved and it won’t get irritated. It will think only of your needs. And it will like it. It doesn’t care if you’re smart, or good looking (which, of course, we are!), and it is happy to keep things very simple for you without too much pressure. And, if you want it to do more, 99 cents will take care of that in the form of an “app”—a tiny application downloaded to improve or enhance its functionality.

The iPhone has needs, too, of course. But nothing a little plug-in for an hour can’t handle. Really, it’s that simple.

I sort of wish I was more like my iPhone. If I needed to do something I didn’t know how to do, I could just get an app for it. Imagine that! Can’t slam dunk a basketball? Dial me up an app and I’m LeBron! Don’t know how to make Beef Wellington? App me a Martha Stewart. It’s that cool! If George W. Bush had an iPhone, I have a feeling things would have been way different over there in the Middle East. None of those pesky tubes and hoses from the “Internets.” We’d have iPresident.

Too bad those BP fellas can’t get an app for their problems (iSpill? iLeak? Oh, the options!)

I realize this may be a phase. A boyish obsession. I mean, it’s just a phone, right?

WRONG! It’s so much more!

I know I’m starting to sound like Steve Jobs’ doting mother, what with the over-the-top loving here. But really, as I’m getting to know my new iPhone, I’m starting to believe it can read my mind.

Dialing the phone: “I wish it would just show me the keypad...” Voila! Keypad.

“Why can’t I listen to music while playing Scrabble?” Oh, you can, dirty boy. And where will you play that “Q”?

“This Web page would look so much better sideways...” Okay, now you’re just making it easy.

At Costco, I see they’re selling a movie I want. But should I get it? Is the Costco price the best I can do? Guess what? An app lets me use my iPhone camera to scan the UPC code and then tells me how much I can get the flick for online or at a nearby store (‘cuz it knows where I am, people!). Turns out, Costco has the deal and I buy the flick without any of that pesky buyer’s remorse.

What relationship does a man have that WON’T make him feel guilty? The iRelationship. That’s what I’m talkin’ about. Oh, my. I’m starting to feel warm.

It can do videoconferencing, video recording, digital photography... Is it watching me now?

It even has voice recognition. I say, “Play music... Lady Gaga--”

--and it does, Poker Face! Now, full disclosure: On occasion my iPhone 4 doesn’t exactly understand what I say and when I asked it to play the game, “Pocket God,” it decided, instead, to dial someone on my contact list.... Classic misunderstanding. And what relationship doesn’t have those? Then again, was she trying to call some other dude? Okay, that’s just the jealousy talking....

I try to recall if I’ve ever felt this way about a machine. I did love my Atari back in the 80’s. We even had “Coleco-vision” for a while, but that seemed to go the way of the abacus. Come to think of it, I loved my abacus, too...

I sure did love my first computer—the Apple IIe. Why’s it always Apple? Does Disney have something going on with Apple, what with the addictive, pervasive, think-of-everything, stylings...? Hmm... Could evil be at work here?

Of course my first IBM ThinkPad rocked the house, too.

Maybe this is a habit. Maybe I’m too fascinated by machines...

I’m a little obsessed, I know. Of course, it may wear off. I may realize after a while that I’ve wasted hours on end, swooning and downloading, and pressing buttons and playing with holes (not mine, the iPhone’s. I mean, really, people!)

But if the time comes and I’m feeling down, I bet there’s an app that will make me feel better...