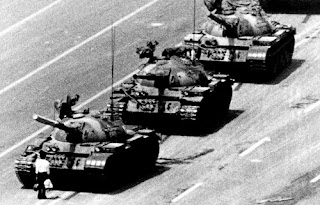 In June of 1989, hundreds of Chinese men, women and children took to Tiananmen Square, publicly protesting the oppression and murder that had been wrought upon them by their communist government. Talk about a bummer. It had taken three thousand years, but they’d finally had enough. Very tolerant, the Chinese.

In response to the protest, dozens of government tanks (proudly built in Russia), rolled into the square to squelch further demonstrations by these students and professional Chinese who had thrown caution to the wind. As the tanks rolled, so did the cameras, capturing for the world to see, a single Chinese man with shopping bags as he stood in front of the line of tanks, daring them to squash him, expressing by his obstruction, his objection to their mission and to his government. He was serious enough to interrupt his day at the grocery store... he just had to get home before his pepperoni hot pockets thawed.

“Tiananmen,” ironically translates to “Gate of Heavenly Peace.” But it was hardly peaceful that June day as the square became a place of conflict, and the anonymous man in front of the tanks became a Chinese hero—a symbol of freedom and, arguably, a symbol of guerrilla shopping... and hot pockets. Yes, people. I’m writing hungry and you get to hear about it.

But before shopping man could be identified and named by his oppressors, the crowd drew him back, away from the tanks and into their breast to his presumed safety. Whether or not he was later found and killed for his actions remains a mystery, as does the man’s true identity. But everyone with a television in 1989 came to know the image of the tanks and that man with the shopping bags—that is, everyone except for the Chinese themselves, who were not permitted to see the footage or to even know about the protest, since the government carefully controlled all media and images. This was one reason they protested in the first place.

However, word traveled around China—but it was only word—that people in the city had been killed and that one man, armed only with shopping bags, had stood in front of the tanks that had invaded the gate of heavenly peace and for a short time became the symbol of the power of the people.

Sudan has been cranky with itself for over 50 years, and still hasn't found their own shopping bag hero. Now, after a so-called peace treaty between the north and south, put in place back in 2005, they’ve decided to call the whole thing off. There’ve been battles and protests, immigration to and fro and, in the end, they figured it wouldn’t work.

The North wanted religion to rule and the South just wanted hot pockets (I may have that last part wrong.) Nevertheless, the divorce is nearly final and on or around Valentine’s day (ironically), the word will likely be given—there will be two Sudans. No doubt just like Korea, the U.S. will pick one we like and one we don’t. It’s like every divorce; it’s hard to stay friends with both the husband and wife. Nevertheless, good for Sudan. They made a go of it. Didn’t work out. Moving on.

Now, I look to Egypt when people are again, crowding into a square to demand things must change. They’re sleeping there, dodging and throwing rocks, hoping for change to be swift and complete. This time, they all have shopping bags. I hope they also have some hot pockets with them, on account of how yummy they are, especially when you’re asserting your freedom. Pairs nicely with a Pinot Noir, don’tcha know? Also, if they have to throw one at someone, it doesn’t hurt as much as a rock and, maybe, the gesture could be happily misconstrued by their enemy as presenting them with a wonderful snack. Kill ‘em with kindness, I say. Maybe the Egyptians do need a shopping man of their own... Any volunteers?

What made me sad this week, watching the footage from Cairo, was that some folks in Egypt are using the unrest to loot and damage antiquities--someone busted a sarcophagus or two. Not cool. Aside from the fact that these are rare and valuable, they’re people! Am I the only one that saw “The Mummy” (or the “Mummy Returns,” or “The Scorpion King,” or that dragon one where the wife was some other actress)? The lessons were clear in those flicks: you disturb the slumber of Imhotep and you get dusted or liquefied or otherwise dismembered and not even Brendan Frasier can save you. Even if he had a hot pocket.

Let’s just make a rule right now—when looking to make social change, when protesting for your inalienable rights, let’s just all agree to leave the treasures and Wal-marts out of it. No stealing, no desecrating, no damaging unnecessarily (okay, you can topple a dictator’s statue, just please don’t let it fall on anyone). Make your posters, march ‘til your feet hurt, scream your head off, and sleep in a Volkswagen. I’m all about the peaceful resistance, the civil disobedience, the love-in (or love-out).

And while we’re contemplating new rules for social unrest, let’s trade guns for pillows and make it a big pillow fight. When it’s all over and the feathers have flown, you’ve replaced your leaders or split in two and everyone’s feeling groovy, we can pick up our shopping bags and go home (and please depart in an orderly fashion, don’t forget to recycle your bottles and cans).

When we get home, we’ll pick the feathers out of our hair, turn on the tube and watch it all happen, microwave our hot pockets and tell our kids we were there when the change was made.