It’s a Weird World After All 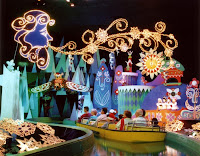 May was weird. Here in So Cal, we’ve had a year’s worth of weather packed all into one month—rain, cold, wind, sweltering heat, you name it. Yeesh. Does anyone wonder anymore if climate change is real? Wake up, people! Polar bears are floating away on ice caps and Southern Californians are being knocked unconscious by giant hail. Not that anyone has noticed we’re unconscious. They just think we’re laid back. And we are.

And with the wacky weather, there seems to be a host of bizarre world developments of the social sort (not the cyclones and earthquakes, mind you—but those were weird, too!). I’m talking about the wave of weird news from such erstwhile partners in evil as Apple and Disney. Darth Vader and the Emperor. Bush and Cheney. Captain and Tennille. Okay, maybe just Captain. Tennille was less evil. Captain didn’t talk and I never trust the quiet ones. Anyhow, I digress.

First, Apple. I learned that Apple has announced they’re fresh out of iPhones. Yup. It’s true. They made only so many of their first generation gizmos, and folks apparently sucked them all up. Now, we either buy them on eBay or, if you’re like me, you wait for the next generation model (or maybe even the next).

Let the money-burners deal with the quirks and bugs of the first generation devices, I say. I’m no “early adopter” when it comes to expensive technology. I believe in guinea pigs and canaries in coal mines. It’s always a risk to be the first to try something new. It’s like I imagine it must have been for the first cave people that decided to try eating an artichoke. Have you thought about it? That must’ve been hilarious. “No, Grock. I think you have to boil it first, and then you pull off those spiky leaves. Only eat the soft part, Grock. Oh, no! Silly Grock. Can someone help him with the bleeding, please?” And who decided King Crabs were edible? Talk about trial and error. Wish I could’a seen that!

But, Apple isn’t saying that the first iPhones were buggy or glitchy and quirky (it’s my techy friends that tell me that). Rather, Apple says, “The first phones were AWESOME! But, um, they were so awesome that we not only stopped making them, we’re not, uh, making any more. So, there. Just wait for the next model.” Okay, whatever. I wasn’t buying anyway.

The second weird piece of news comes from Darth Apple’s evil twin, Darth Disney. It appears the rumors in Anaheim are true. Disneyland’s famous ride, “It’s a Small World” is officially closed for renovation. I’ve heard the evil empire must refurbish the flumes and the boats because the ride’s passengers (i.e. you and me) weigh more than the average rider weighed back in the 1960’s when the ride was designed. We’ve surpassed our parents, but in all the wrong ways. Those sixties radicals (I was a mere infant, so don’t blame me) were apparently thinner than we are now in the new century. It’s us, their offspring, who have fat asses. Of course, you’re thinner when you’ve burned your bra, right?

The thinnies from the sixties were the perfect size for the ride back then. But now our friends, the Disney “Imagineers” have to make the ride’s flumes deeper and the boats more buoyant to keep the ride from coming to an embarrassing and screeching halt every time our weight causes the boat to hit bottom. Too much ass for too little boat, so they say. Or maybe they didn’t say that. Okay, that was just me. Disney folks can’t say “ass”—they strike those words from the press releases, don’t cha know?

I’m sure the Disney engineers had a field day with their ideas for a fix which were, no doubt, shot down by the top brass (or top dog—would that be Pluto or Goofy?). The dorky engineers and their evil corporate bosses must’ve had a conversation like this when they were listing solutions to the "scraping-the-bottom" problem:

Engineer: How’s about we allow fewer people per boat?
Executive: No, that would mean longer lines and crankier guests. Next?

Engineer: How about we add more boats?
Executive: You gotta be kidding? We’ve already bribed the Fire Marshal to allow the bazillion boats we already have lined up, port to stern, inching through this ride!

Engineer: Why not just encourage healthier snacks in the park and reduce the weight of the average rider in the first place?
Executive: What?!! Healthier snacks cost more! You’re clearly not Disney material. You’re fired. And you’re dorky.

Don’t get me wrong. I think people of all shapes and sizes should have equal access to the fun and frolics offered by Darth Disney. And I’m no stranger to the churro. But, it does make one stop to think about how long ago these rides were designed—and what the assumptions were back then. At least on “It’s a Small World,” the ride goes so slow, the risks have been relatively small. But what about the speedy coaster dashing through the Matterhorn? Did they assume people had a better grip than they do now? We all have carpal tunnel, blackberry finger disease these days. We can’t be expected to hold on!!

All I know is, on that ride, the person sitting in front of you better be someone you know well BEFORE the ride, or you’ll surely know them well by the time the ride is over. I’m talking about a free lap dance, my friends. “Happiest Place on Earth?” Oh, yeah! And, no, lap dances are not mentioned in the press release, either.

Well, I suppose I should be happy that Darth Disney is updating a ride for safety and comfort reasons. Lately, all the “upgrades” have been about adding Johnny-Depp-Jack-Sparrow to the “Pirates of the Caribbean” ride or putting new music in Space Mountain. Maybe it’s time for the real upgrade.

And maybe that’s what Apple has in mind, too. Maybe, these days, it’s all about the upgrade. It’s an election year, right? Maybe we’re all hoping to make things better…

Then again, smaller asses would be good, too—or at least considered an upgrade. Like I said, weird month.