Ready or Not... Comikaze! 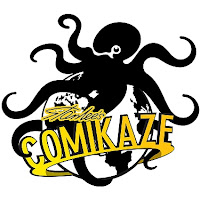 Once again, I found myself at a comic book convention—this time at Stan Lee’s Comikaze at the LA Convention Center.  You may recall my last pilgrimage to the Mecca of all comic book conventions, San Diego’s Comic-Con.  That convention left me exhausted but excited, yet not all-too-eager to jump into the fray of another human flood of costumed super dudes.  Of course, if I had a cowl, a shield, and a body full of super-soldier serum, I’d be ready for anything, but don’t get me started.


Any reservations I may have had were quickly dispelled; Comikaze did not disappoint.  It had all the usual features I’ve come to expect from comic conventions:


·        The attendees...  Open-mouth-breathing, wide-eyed hordes of social misfits, MENSA members, rocket scientists, outcasts (or as I like to call them, “my peeps”).  You’ve never seen such a wretched hive of scum and villainy.  Shout out to my Jedi fans—Holla!


·        The food...  cardboardy pizza, rubber hot dogs, mystery tacos, surprising and rather wonderful noodles, and junk food the likes of which these folks haven’t  seen since... well, probably yesterday


·        Memorabilia... Shirts, comics, statues, collectibles, clothing, trading cards and just about everything else from every age of super hero-dom, the Potterverse, Who-dom, The Shire, Horror-ville, and whatever other alternate universe conflicts with ours.  No passport required.


·        The aroma... The slight pungent odor of sweat coming from too-often-worn elaborate costumes, headdresses, and masks.  Maybe it was just the sweat coming from the Quidditch pitch or perhaps the hundreds of Magic Card players hunched over tables.  After Halloween, we used to throw away our costumes; not these folks – they just enhance, bedazzle, and re-don (the parent in me would like to recommend they consider “dry clean” as well)

Of course, all this eye candy was accompanied by the occasional conflicting feeling that I was both exactly where I was meant to be and that I was entirely out of my element.  Then again, that just may be one of the many manifestations of my soon to be spectacular mid-life crisis.  Stay tuned.


At Comikaze, the celebrity encounters were a-plenty.  I got to meet with and speak to Stan Lee, my hero.  You may recall I only saw him from afar at the last “con.”  Some of you know I also got to meet him way back in college, too.   And just like it was back in college, the drooling was once again up close and personal (poor Stan!).  I got to shake his hand, hug him, take my picture with him, and have a chat.  Sort of like meeting Santa, without the sitting on the lap and wishing for toys.


My Stan chat went like this (imagine me wide-eyed and Stan graciously smiling):


Stan:  Yeah, you were wearing the brown pants. [He grins mischievously and I know I’ve been duped. He is a riot, it should be known.]


Herb:  Very good!  [Here, I’m interrupted by a Stan staffer who positions us for taking our picture.  When we’re done, my family joins]


My wife says it’s an honor to meet him and he says, “The pleasure is all mine, my dear.”  Such a classy guy!

In case you’re still wondering, Stan is an awesome dude.  Whether you’re a comic book aficionado, a fan of Marvel hero movies, or simply a citizen breathing air on Earth, there’s no escaping his legacy.  The guy invented Spider-Man for crying out loud!  Wake up, people!


Clearly, this was the highlight of my weekend.  I have a Stan-the-man-crush.


Of course, Stan was not the only celeb at the con.  I did take some perverse pleasure watching some of the other celebrities attempt to approach Stan’s level of fame.


For instance, I enjoyed watching the ill-advised, post-plastic-surgery Morgan Fairchild, dolled up, sitting in a booth, watching the throngs and hordes of orcs, Iron Men, ninjas, Jedis, Freddy Kruegers, and Doctors Who, Doom, and Strange pass right by her, not even knowing who she was.


Kids, if you don’t know Ms. Fairchild, get on those Internets and Google-ize her.  It may take a little work.


I must say, Ms. Fairchild looked very disgruntled at being so ignored, and I half-expected her to grab a “batlith” from a passing Klingon, jump the draped folding table, and disembowel some pimply teen or maybe throttle her agent, if just for the attention.  That would’ve been awesome though, given the mock battles that routinely broke out not unlike flash mobs, I suspect very few people would have noticed.


Oddly (and counter-intuitively) Lou Ferrigno was similarly passed over by the nerd minions, though a lot of people squinted in confusion at the life size 1970s picture of him dressed as the Hulk which was propped next to his booth, probably not fully understanding what that was about.


I was sorta sad for ol’ Lou.  He was alone and clearly forgotten, though seemed like a nice guy, if not just a bit forlorn.  I guess the modern variety CGI Hulks are cooler than the old school big dudes painted green.  Sorry, Lou.  You’re just an analog superhero at a digital con.  Please don’t smash me.  Blame the new Hulk, Mark Garofalo and those guys at Marvel studios.


There was a bit of a Batman reunion with booths hosting Adam West (TV’s Batman), Burt Ward (TV’s Robin), and Julie Newmar (TV’s Catwoman--the sexiest of them all if you ask me, which you didn't).  It was practically a bat cave with all the bat-action goin’ on!


Richard Anderson (TV’s Oscar Goldman from “The Six Million Dollar Man”) was there to sign autographs.  I have nothing but respect for Mr. Anderson, but if someone told me he was 109 years old, I would’ve believed him.  That dude could use some bionics of his own.  What is the shelf life of celebrity?  A sad question.  Maybe we can rebuild him.


Elvira, vampyric TV icon and host of early 80’s TV horror marathons was there.  She had lots of Elvira memorabilia and was quite nice to everyone who came to see her.  Unlike Ms. Fairchild, the mistress of the dark seemed to fit in quite nicely with the nerd minions and was ready for fun.  Didn’t get to chat with her, but wish I did!  She floated my boat back in the day and maybe just a little even now.


Although I refrained from donning my own costume, I did wear my Captain America and Super Soldier shirts that weekend.  I still admired the earnestness of those more bold and brave in how much time and money they spent to dress themselves and then commit to their characters.  And though I recognized most of the superhero costumes, I didn’t have a clue about the pink and blue-haired manga dress-ups, nor the self-designed, self-named monsters like last year’s Shark Commando.


I heard one guy in a draped, boney/hairy costume explain to someone that he was a Level Three Oranga-Lith (I think that’s what he said).  The person on the receiving end of the explanation nodded and said, “cool,” but I was just confused and admittedly more than a little amused.  But, you gotta give points for creativity, right?


There was, however, a bunch of zombies!  This was cool.  I get zombies.  No explanation necessary.


In fact, the convention had set up an indoor area the size of three football fields surrounded by chain link fencing.  Within the fenced area, they set up ten of those big bounce houses that create slides, climbing walls, fortresses, and such so that the area was one big maze of obstacle course elements simulating a decimated city.  Then, they turned down the lights, filled the place with actors dressed as zombies, set off occasional sirens and let a roving spotlight search the scene.  With the mood set, they sent people through the maze at $30 a pop!  They called it “Zombie Apocalypse” and it was all kinds of awesome.  Genius, in fact.


“Survivors” got a limited edition “Walking Dead Season 3” poster.  If you don’t know about AMC’s TV show, “The Walking Dead,” I’ll forgive you, only if you promise to get on the ol’ Google, figure out what you’re missing, order the DVDs/Blu-Rays and become hopelessly addicted.  You can thank me after the apocalypse.


Anyhow, back to the con.... my son and his friend went through the apocalypse twice (I love that you can survive two apocalypses... apocalypsii?).  I was excited more that I didn’t have to pay again.  I make it a policy only to pay for one apocalypse a day.


Thinking the fun was over, I was pleasantly surprised to learn the next day that my son and his friend convinced the show runners to let them dress as zombies and torment the other wanna-be survivors.  Unbelievable!  Thirty minutes in hair, costume, and makeup with professional makeup artists transformed these kids into very gruesome zombies.  They were then instructed to chase people for three hours.  To say they had the time of their lives would be an understatement (time of their deaths?).  If I knew being dead made my son happy, I would have killed him years ago!


The weekend offered opportunities for the boys to play Quidditch, traipse around as zombies, play Magic Card games, buy comics and posters and shirts, play video games, and gawk at their favorite purple-haired “Hit Girl” (look it up, people.  This blog is interactive).


Throughout it all, I couldn’t help but wonder how such events reflect human nature and pop culture.  Deep inside, we all like to pretend.  Some lead real lives and come to conventions to pretend and some just pretend in real life and come to conventions to get real.  I say, give in to your inner nerd.  Embrace your hidden geek.  Become the hero/zombie/princess/ Level Three Oranga-Lith within you!  Of course, if there’s a monster in there, I’ll advise you to keep pretending you’re just a regular human, but love your inner monster anyway.


Of course, once that mid-life crisis hits, you may not be able to control your inner Ferrigno.  Then again, no one may notice.

Herb, you genius you, it was great to read your post on zombies and other creatures.

Got a big kick out of your boy getting costumed as a zombie and chasing people for three hours; it says good things that he was willing to risk it.

Your report had all the edge, wit, and gorgeous turn-of-phrase I've admired for years in your writing.

Should I pick a topic for a future Herb-a-thon? Okay. So many great lines in this post to choose from. Lemme see.... Got it: What is the shelf life of celebrity?

Chapman U is hosting the Orange Book Fair this Friday/Saturday 1-5pm +/-...if you're looking for another enriching family venue.

My former student David Collins (Shanghaied--no, not him; his book title) is speaking at 1 and 2pm on Sat. For geeks, my cool former professor James Blaylock, godfather of steampunk, is also speaking, along my former student, romance writer DeAnna Cameron (The Belly Dancer--no, not her; her book). I'll be there!

What a moment - meeting Stan the man! Jon was so bummed he couldn't go. Very neat to read your exchange and...felt like I was there. BTW I'm glad you still have your mid-life crisis to look forward to:-)