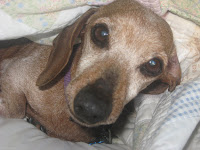 It’s almost too easy.  New York Congressman Anthony Weiner takes a picture of... well... his wiener, and then posts the photo on Twitter.   Before long, everyone in the world saw the picture of the congressman in his undies.  We knew he was a Democrat—now we knew just how far left he leaned (sorry, even I couldn’t resist that one!)

At first the congressman lied, said his Twitter account was hacked.  Someone was playing a joke on him.  Then he came clean—the wiener was Weiner’s.


The jokes, particularly the unintended ones were hilarious.  For instance, Nancy Pelosi promised there would be a “probe.”  Couldn’t she have called it an investigation?  Ouch.  The congressman himself said he “had people looking into it.”  Um.  Yep.  People were looking into it.  And onto it.  And over it.  And under it.  Jeepers, see how easy this is?  The jokes write themselves!
I just have to marvel at the arrogance of the congressman—did he really think he could get away with it?
The Weiner-man is sort of like my wiener dog—my dachshund, “Mr. B.”  This dog is 15 years old, which in human years is dead.  Like Weiner the congressman, wiener dog Mr. B thinks he can get away with anything.  He urinates everywhere, poops where he likes, and even barfs in front of me while I’m watching TV.  Right there on the rug, with the convulsing and retching and heaving.  It’s gross.  It’s like someone’s given The Exorcist’s Linda Blair some syrup of ipecac and let the hurl flow.  Yuck.  I’m just waiting for the dog’s head to spin.


The dog has no shame.  Blow and go.  Poop and go.  Pee and go.  He’s too old to care, or perhaps too old to control his bodily functions.  His only defense against expulsion from our house—he’s cute, has big wet eyes, and the kids are crazy about him.  Now, I just watch where I step.
What’s Congressman Weiner’s defense?  I suppose he thinks he’s cute, too, but didn’t he think he’d get caught?  I mean, think about all those political figures that came before him who should have been a warning to the Congressman:
·        “The Governator” Arnold Schwarzenegger was caught.  A Latino love child is hard to blame on a hacker.  Hasta la vista, baby.
·        Congressman Chris Lee posted a shirtless photo of himself on Craigslist while soliciting a male-to-female transsexual.  Really?  On Craigslist?  I posted a picture of my patio table on Craigslist and it took a week to get any attention.  Clearly, I don’t understand Craigslist.
·        Congressman Mark Foley got caught sending inappropriate AOL instant messages to teenage male congressional pages.  Oopsy daisy.   The dude was chairman of the House Caucus on Missing and Exploited Children.  Maybe he was just doing research.  “You’ve got male.”  Ahem.
·        Senator Larry Craig from Idaho was caught tapping his foot in the Minneapolis Airport bathroom stall, hoping for sex.  Turns out the tappee was an undercover cop.  Talk about looking for love in all the wrong places!  I had to giggle when critics said it was time for Craig to give up his seat.  Uh.  Yeah.  And don’t forget to flush the wax paper seat sheet when you do give it up.
·        President Bill Clinton got caught with Monica Lewinsky (don’t mess the dress)—and Bill had a whole entourage of secret service men to help with the secret servicing.  Really Bill?  Really?
·        Senator Eric Massa got busted for inappropriate tickling of male staff members.  Some people are just too “handsy” for political office.  I just loved Massa’s CNN interviews when he explained it was no big deal and that he used to be known for his massages when serving in the Navy.  Dude, not the right defense.  Don’t ask.  Don’t tell. Come on now!
·        Senator John Edwards had a love child, even as his wife Elizabeth struggled with cancer.  He was accused of using campaign finances to take care of his baby-mama.   Bye-bye political aspirations; hello criminal investigation.  Talk about reaching out to your constituents.  Let’s just call it a welfare-to-work program and let him off the hook.  Or not.

Now, Congressman Weiner joins a long, sad list of men who seem to think they can work under the radar while simultaneously working in the public eye.  When you’re a public figure, secrets get out, Weiner-boy!  Therein lays the “public” part.
At least Mr. B doesn’t pretend he’s serving anyone but himself.  No alter ego there.  He’s gross and proud of it.  Or, at the very least, he’s indifferent.  I think he suffers a little from doggy-dementia.  He stares a lot at walls and jumps at unseen ghosts.  It would be sad if he wasn’t so happy or blissfully clueless—haven’t yet figured him out.  But at 105, he's just happy to be here.

When you think about it, Weiner’s name seemed to predestine him for scandal, like Eric Massa and his famous Massa Massages.  Shoulda seen it coming!  Please, don’t anyone elect Congressman Buttcrack or Senator Wang.

I don’t think I could handle the photos.

Mr. B - such a sweetie. Glad you overlook his bodily function problems. Makes you wonder whats up with these politicians. I'll always remember when I was a waitress at Mr. Schwarzenegger's restaurant (back in the day), how he would comment on the women passing by - "that is a beautiful woman" - um, even I knew that the guy wasn't a one-woman dude, you know?

Hey Herb-
Very clever, Herb. A history buff, I can tell. Too bad you spelled "public" correctly. Coulda left out the "l"...

Always, fun, Herb. Now can we get together sometime soon?!