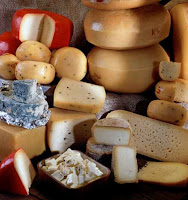 As an admitted Franco-file and a Scandinavian by birth, I have a rare and committed devotion to cheese. Soft cheese, hard cheese, stinky cheese, cheese with unpronounceable names, cheese with mold that would scare the US department of Health—I love them all. I’ve been known to smuggle cheese from foreign countries back to the U.S. counting down, like the tick of a bomb in Kiefer Sutherland’s pants, the hours between the purchase of the cheese and its inevitable expiration at the end of the flight, fearing (or hoping) I might have to eat the whole brick en route lest the whole thing go south. I doubt Keifer would eat a bomb, but I don’t really watch “24” so I’ll let one of you tell me if he’s ever contemplated the ultimate sacrifice via digestion as I have done. Yes, I’m saying it: Keifer’s a wuss and I’m a cheese hero.

Those familiar with my blog know too well the stories of my gastrointestinal adventures (sorry!). After internal probes that are typically prohibited by the Geneva Convention and an unsuccessful relationship with an alleged allergist, the source of my intestinal distress has heretofore gone undiagnosed.

So I’ve been forced to contemplate the worst possible thought—maybe it’s the cheese.

I long ago switched from regular milk to soy milk because it upset my stomach. I thought of that not so much as lactose intolerance. I was just “lactose annoyed.” But could my dear, delectable, nutty, smooth, creamy, silky, lovely, yummy cheese actually be causing my internal angst?

I had one of those “Men-In-Black” moments where Will Smith is offered a spot as a secret agent if he’s only willing to give up his identity—forever. He sits on a bench as the sun rises and falls, spending an entire day deciding if becoming a “man in black” was worth walking away from everything he knew. (Okay, duh? We’ve seen the trailers and it’s only 15 minutes into the flick. We KNOW he’s IN!).

But could I do it? Could I walk away from cheese? I knew it wasn’t just a brick, a slice, a wedge, a shmear. We’re talking pizza, fondue, mac and cheese, chicken Kiev (alright, I never really have that, but when you think you’re gonna lose something, you suddenly want it more than anything. I bet you want Chicken Kiev right now! Oh, yummy Kiev).

I had my sleepless night like Will Smith, the imaginary tastes of Comté and Brie swirling in my mouth dreaming of my fate. Forget sugar plum fairies, people. The cheese stands alone.

Then, I decided I’d go for it. I was in. It was time for me to cut the cheese.

Um, well, you know what I mean. I decided I could give soy cheese a try and ignore the siren-like call of the goat, the cow, the sheep, the buffalo…

Now, before you disparage soy cheese (and you should understand that I’m the first to protest the application of the world “cheese” to anything that isn’t), you should know that not all soy cheese is created equal. I actually have found “Veggie Slices’ to be a reasonably digestible and not unpleasant brand. It ain’t cheese, but on a cracker, I’d eat it.

So, I decided it was time. I applied my CRP (Cheese Removal Plan) and immediately saw results. I felt better. I really didn’t want to admit it. I still felt the pang of my lost love, being spoken aloud. Wondered if my cheese might miss me too. I know cheese can sweat. Can cheese cry?

But in the end, the cheese, my love, was not so kind to me. Like one of James Bond’s girlfriends, my cheese wasn’t just sexy and beautiful. It was dangerous. Don’t get me wrong—I love me the Bond girls. Lipstick and guns. Very compelling. Quite like cheese, really. I’m just koo-koo for queso.

But a week into the CRP, I fell off the wagon. Pizza, the sneaky cheese delivery system we stole from the Italians, delivered the deadly blow in a glorious way. Hoo-nelly. I was bloated like a blimp and feeling like one of the Keifer-pants-bombs ready to explode!

Then, came my second discovery—Lactaid. A chewable little pill you can take when you know the cheese is coming. Chew, swallow, and bring on the pizza, baby! It was like Bond’s gadget-guru, “Q” had given me a secret pill to fend off the effects of the bends or the airless impact of space travel or the poisoned lips of a Bond girl. And it worked!

Now, don’t get me wrong—it was chalky and horrible and almost not worth it (Note to the Lactaid people: Build a better mousetrap!) But that next slice of pizza was SO good. I’m not ready to eat Lactaid on a daily basis on account of the “yuck.” But there are now options. Bond can love ‘em and leave ‘em. Keifer can jump from the plane (or drop his pants?). Herb can eat cheese. It’s on that level, people!

My guts seem to agree. I’ve been more, shall we say, even-keeled. Not quite 100%, but notably better, if not a little heartbroken. I can’t always say yes, but I don’t always have to say no.

Put that in your pants, Kiefer.